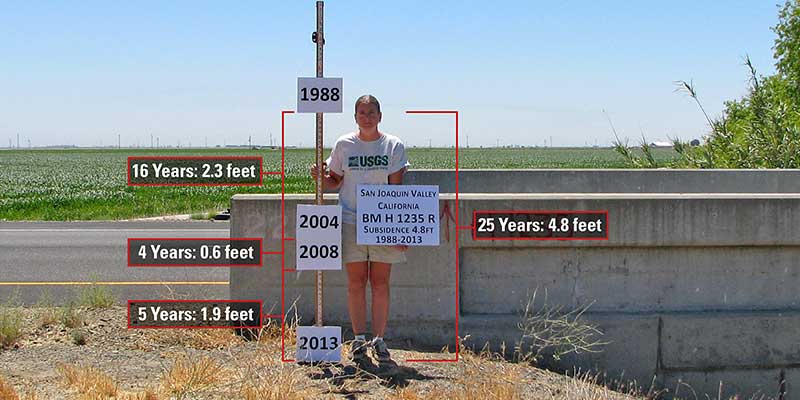 In California each year, massive groundwater withdrawals for agriculture, industry, and public use lead to aquifer compaction as groundwater becomes depleted. But in the rainy season, the ground again swells upward as aquifers recharge with stormwater and snowmelt runoff.

A new, animated map of California, created with 18 years of interferometric synthetic aperture radar (InSAR) and GPS aquifer data, illustrates the cycle of compaction and expansion like never before. In the map, the state looks reminiscent of a beating heart or, as some have said, it appears to “breathe” with water. The project’s lead author Bryan Riel, a NASA Jet Propulsion Laboratory (JPL) geophysicist, said:

What we see through the rising and falling of the ground surface is the elastic response of the land to regular changes in groundwater level.

Scope and methods of the study

The study, “Quantifying Ground Deformation in the Los Angeles and Santa Ana Coastal Basins Due to Groundwater Withdrawal,” used 1992 to 2011 open-source radar data collected by European Space Agency satellites to create radar interferograms, which are pictures made by bouncing radar waves off of the earth. There are 881 frames in all, with enough resolution to determine ground altitude to the millimeter from San Fernando to Irvine. GPS data collected by the Orange County Water District and the Water Replenishment District of Southern California was then used to corroborate the study’s findings.

The practical uses of the visualization tool are various. The rising and falling documented in the kinetic map can help cities and water management districts accurately determine the exact dimensions of their aquifers and how water use affects them seasonally. The accuracy of the study also allows researchers to pinpoint where water does not flow, which helps map the boundaries of aquifers and faults.

One unexpected discovery brought to light by the project is what could be a heretofore unknown fault line stretching across the northeastern portion of Orange County.

At the beginning of the study period, we see big sinusoids — higher highs and lower lows. Toward the later half of the study, that flattens out a bit, indicating that water control districts were more actively managing aquifers, and making sure to put water back into them instead of just taking it out.

The map will serve as a tool for applying the 2014 Sustainable Groundwater Management Act (SGMA), which instructs groundwater management to avoid permanent ground subsidence. But, there is always the danger that once an aquifer is pumped out, clay and silt in the area might compact, lowering the ground level and irreparably damaging the capacity of the aquifer. In the San Joaquin Valley, soil compaction caused by a falling water table has lowered the ground level by up to 28 feet over the decades.

An upcoming collaborative project slated for 2022 between the JPL, NASA, and the Indian Space Research Organisation (ISRO) will launch NISAR, a newer satellite for radar mapping. It will provide much more detailed bi-directional observations every 12 days. Simons said:

With that kind of data, we’ll be able to paint an even clearer picture that could reveal even more about the ground beneath our feet.”