A Very Brief History of Lead in Water Supplies 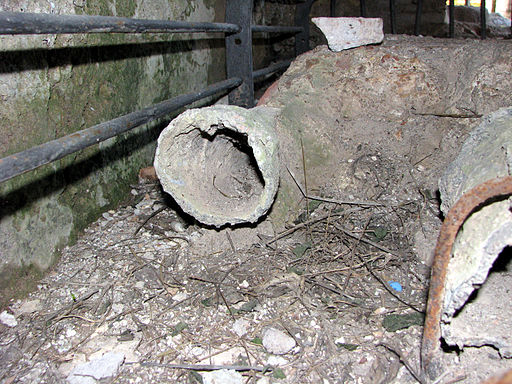 Lead has been present in water since the invention of plumbing.

If this claim seems like hyperbole, consider that the symbol for lead is Pb — from the Latin word “plumbum.”

Lead, a naturally occurring metal, has been used throughout history, and was long a material commonly used in plumbing. In a way, it’s well suited for making pipes because it’s stable and easily malleable. The only problem is that it’s poisonous.

Lead poisoning was a common fate for ancient Romans. In addition to ingesting lead through water supplies, members of the upper classes ate from lead plates and drank wine — in which lead was used as a preservative — from lead-based vessels.

Jack Lewis, writing about lead as a fuel additive in the EPA Journal, noted:

The ancients regarded lead as the father of all metals, but the deity they associated with the substance was Saturn, the ghoulish titan who devoured his own young. The very word ‘saturnine,’ in its most specific meaning, applies to an individual whose temperament has become uniformly gloomy, cynical, and taciturn as the results of lead intoxication.

Lead was used throughout the Roman Empire in products ranging from cosmetics to condiments. Household tableware was typically made from lead, including cups, plates and serving ware. The material was so widely used that even some of the poorest citizens could periodically come into contact with it.

Most important of all was lead’s suitability as inexpensive and reliable piping for the vast network of plumbing that kept Rome and the provincial cities of the Roman Empire supplied with water. Indeed, the very word ‘plumbing’ comes from the Latin word for lead, plumbum. The lead pipes that were the vital arteries of ancient Rome were forged by smithies whose patron saint, Vulcan, exhibited several of the symptoms of advanced lead poisoning: lameness, pallor, and wizened expression.

The consequences of lead exposure were well known. Many Romans suffered from chronic lead poisoning. Lead mining and smelting was eventually prohibited in Italy. Still, the leaders and aristocrats of Rome clearly showed, according to various scholars, the varied symptoms of lead poisoning including saturnine gout, and sterility, infertility, and stillbirths.

Lead Use in the United States

Lead continued to be used in many ways, including for printing and in the manufacture of arms and ammunition, which is how lead was first used in the American Colonies.

Lead pipes came into use throughout the United States for transporting drinking water, but it was identified as a source of lead poisoning in the late 1800s. In a history of lead plumbing in the American Journal of Public Health, Richard Rabin, MSPH, an activist in occupational and environmental health, said that by 1900, more than 70 percent of cities with 30,000 or more residents were using lead-based products for conveying water. It was less expensive and more durable than iron, which was the other option available. Lead pipe could also be easily bent, allowing pipes to be shaped to conform to the contours of existing buildings or other structures.

The problems with lead were first noted in major cities, including New York and Boston, where indoor plumbing and lead service pipes — conduits for carrying water from the street main into a building —  contributed to increasingly frequent incidents of lead poisoning. The earliest health concerns were raised in 1859, but no concerted effort to ban or limit lead plumbing was made until the 1920s.

Lobbying for Lead Pipe Use

Rabin says a powerful trade lobby, The Lead Industries Association, formed in 1928, made certain that lead-based plumbing and products would be used despite mounting scientific evidence about the associated health hazards. The lobbying group remained active through the 1970s, monitoring changes to building codes and publishing educational materials to support the continued use of lead pipes.

To be fair, in the U.S. lead was being used in many other products, including paint. The country was consuming roughly 40 percent of the world’s lead supply well into the 1980s, including as a gasoline additive.

Despite a voluminous literature on the dangers of lead water pipes, and based on such knowledge, a national trend to restrict and prohibit the use of lead for water distribution, the lead industry continued its promotion and sale of lead pipes for several decades. […] Although the use of these products has long since ended, our cities and towns, and society as a whole, are still paying the price.

Regulations for Lead Use

The U.S. Environmental Protection Agency enacted a treatment technique regulation for lead in 1991 to mitigate problems associated with lead contamination occurring from corrosive water. Water systems must follow the Lead and Copper Rule, which calls for regular water sampling and the replacement of lead service lines.

These rules were last revised in 2007. State governments may have stricter guidelines in place for drinking water than the EPA. The guidelines apply only to public water systems.

More information about drinking water quality protections and standards is available from the EPA.

Images by Chris73 used under a Creative Commons license.