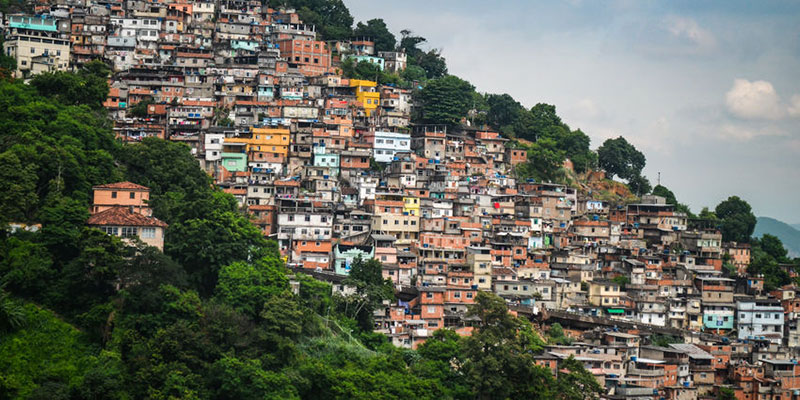 In Brazil’s favelas, usually built with no planning or cohesive sewer systems, it can be nearly impossible to maintain hand-washing and other hygienic practices on a large scale.

Brazil is the world’s fifth largest nation in terms of both its population of 210 million and its vast 3,287,597-square-mile (8,514,837 km2) area. It sports the eighth largest economy on the planet, and the city of São Paulo has the largest GDP of any city in the Southern Hemisphere.

Known for its beaches, music, and dance, Brazil also is a large exporter of petroleum, minerals, and agricultural products, including a third of the world’s coffee supply. In 2012, Brazil had 20,850 square miles (54,000 km2) of irrigated land, and it is home to the world’s largest river, by flow volume, the Amazon.

The motto of Brazil translates to “Order and Progress.” The sleek architecture of its city centers is a picture of order and modernity. But Brazil is still haunted by stark economic division. On the periphery of its cities, slum conditions have always been a problem in the favelas, or peripheral, low-income communities.

Now, in the midst of the COVID-19 pandemic, lack of access to adequate water and sanitation in favelas has grown as a life-threatening problem. Italian photojournalist Tommaso Protti, who covers the front lines of the pandemic in Brazil, describes the situation:

The water issue is central. To fight the disease you need to be clean, you need to wash your hands, and water is something that is lacking a lot in the peripheries. They often don’t have water for days, don’t have water to wash themselves or to clean the houses. But this is something that has been present for the people living in the peripheries forever.

The favelas are often expansive communities built with no planning or cohesive sewer systems or wastewater treatment, with pipes discharging sewage onto the ground near inhabited buildings. Residents store water in tanks if piped water arrives at all, and rainwater is sometimes the only source. With water so scarce, the “frequent and proper” handwashing prescribed by the World Health Organization (WHO) falls by the wayside.

Complicated by a shortage of reliable information, COVID-19 has frequently been overwhelming health care facilities. In Manaus, capital of the Amazonas state, many residents died without even realizing they had COVID-19 until it was too late, and the city resorted to digging mass graves. In the best of systems, prisoners face elevated risks. But Brazil has the third largest number of prisoners in the world, living in overcrowded conditions without sanitation.

At the state level, Sabesp, São Paulo’s state water utility company, has granted water bill payment exemptions until the middle of August for 2 million customers. Nationally, in a landslide vote, the Brazilian Senate has just passed a sweeping bill to clear the way for privatization of many Brazilian state-owned water utilities in hopes it will draw $130 billion in investment capital to address the water needs of an estimated 35 million Brazilians.

On the opportunity side of the crisis, such large-scale private investment presents opportunities for Brazil to “leapfrog” with newer, more efficient water treatment technology, some of which deploys rapidly and is compatible with close urban quarters.

There are multiple benefits to universalizing water and sanitation services by 2033. Sanitation has a multiplier effect that creates jobs, health, education and improves people’s lives.

Brazil’s people and economy could suffer much more harm between now and 2033. On a larger stage, its water crisis is a reminder to the world that both time and resources should be applied to meeting water planning and sanitation goals before another pandemic hits.