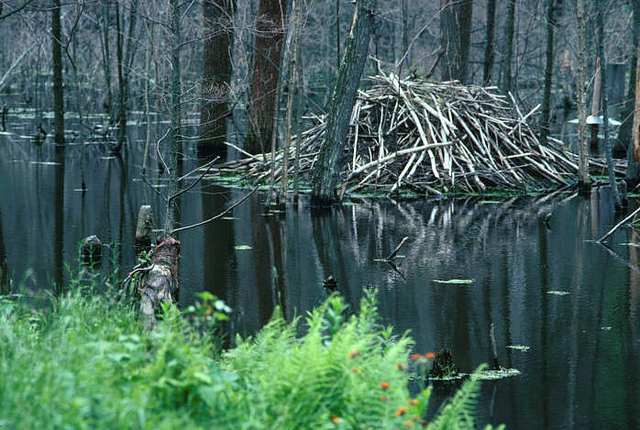 The beaver is a North American mammal that lives on rivers and streams and is well known for the dams and lodges it builds on them. These herbivores may be known for their building skills, but researchers say their structures and even their presence help remove potentially dangerous nitrogen from the water.

The ponds they create slow down water movement, which, in turn, helps in the natural removal of nitrogen from the water, according to a team of researchers from the University of Rhode Island, the Cary Institute of Ecosystem Studies, and the Atlantic Ecology Division of the United States Environmental Protection Agency.

When there is excess nitrogen in the water it can cause problems to human health and the environment, including harmful algal blooms, a major concern in water quality management. Surface water is a common source of drinking water for communities of all sizes throughout North America.

This blooming is sometimes known as red tide because some of the phytoplankton in the water may turn it red when they bloom. Many scientists use the term “harmful algal blooms,” because some blooming incidents don’t involve species that discolor the water, even when they secrete toxins and otherwise taint water.

The presence of toxic algae in ponds, lakes, reservoirs and other surface drinking-water supplies can cause health problems — some fatal — to humans and other mammals, and can have additional negative economic consequences when recreational waters are closed.

The beavers’ role in the denitrification process is relatively straightforward, according to the Potomac Conservancy. Once the beavers have dammed an area, forming a pond:

Aquatic plants like lily pads sprout up in the pond, and the dead leaves and plant matter eventually fall to the bottom to decompose, becoming feast material for bacteria. As the plant material decomposes, oxygen levels drop, and the bacteria are forced to find another source of oxygen. They turn to the nitrates in the water, breaking down the chemicals, using the oxygen, and releasing the nitrogen out of the water as a gas.

Nutrient-rich agricultural runoff is a major source of nitrogen in surface water. An increasing number of municipal water utilities throughout North America are experiencing problems with harmful algal blooms. Lake Erie, for example, was the site of the largest harmful algae bloom on record in 2015. And, algal toxins contaminated drinking water supplies for nearly half a million people in Toledo, Ohio, in 2013.

The researchers looked at how the beavers’ network of ponds and dams can reshape surface waters into “complexes of ponds, wetlands, and connecting streams.” Beavers typically live in areas where small streams are located, often areas targeted for human development.

Researchers specifically looked at the nitrate concentration in three beaver ponds in Rhode Island. They found that the beaver ponds can bolster natural denitrification and “remove approximately 5 to 45 percent of the nitrogen in the water, depending on the pond and amount of nitrogen present.”

Arthur Gold, one of the lead researchers on the study and a watershed hydrology professor at the University of Rhode Island, explained:

It’s noteworthy that the beavers have such an impact on improving nitrogen downstream. […] We have a species whose population crashed from widespread trapping 150 years ago. With their return they help solve one of the major problems of the 21st century. I don’t want to minimize that. We have to remember that those ponds wouldn’t be there without the beavers.

The work — “Beaver Ponds: Resurgent Nitrogen Sinks for Rural Watersheds in the Northeastern United States” — was published in the Journal of Environmental Quality.

Image by the U.S. Fish and Wildlife Service, used under Creative Commons license.