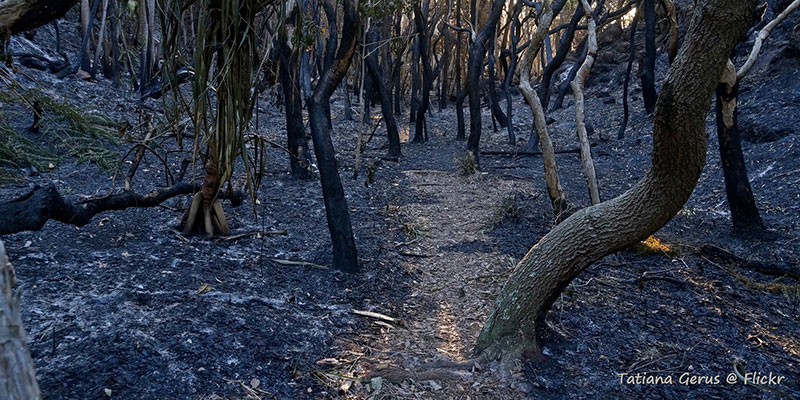 No matter whether rain comes sooner or later, fires are damaging water supplies already stressed by drought and high temperatures

As of this writing, much of Australia is on fire and is expected to burn for months. The fires have killed 25 people so far, and streams of refugees are fleeing and wondering how livable their land will be in the future.

Wildfires can degrade water quality and alter riparian ecosystems in complex ways, and when heavy rains follow closely on the heels of a major fire, they amplify the harm done. So, whether it rains soon or not, Australia is facing big challenges.

Harm to surface water and groundwater from toxic runoff is not a current problem because there is a record-breaking drought accompanying the fires. In January, the temperature in western Sydney was recorded at 120 degrees Fahrenheit. Before the current drought, there were two decimating 100-year floods in two years in Queensland. Sea-level rise associated with climate change is also expected to affect Australia, with its high coastal population. Inland, many communities are expected to run dry later in the year

Rainfall after a fire washes contaminants into water sources, which can spell problems for agriculture and public health. The extent of damage to water quality after a fire depends on a number of parameters, including:

More intense fires can severely damage watersheds by killing ground vegetation, altering hydrology, and changing soil structure, dynamics, and erosion. High turbidity from sediment entering a stream can bring an excess of nutrients, metals, and other toxins sequestered in the affected soil and vegetation.

Loss of vegetation represents a loss of habitat, and it also can raise the temperature of streams due to increased light, and reduce cover, exposing smaller organisms in streams to predators. With increased contaminant loads, warmer water accelerates organic matter breakdown by bacteria, which can suck the oxygen from the stream and suffocate fish. Humans, too, can be affected. Fire-affected water sources are likely unsafe for agriculture and human consumption without treatment.

Necessities directly after a fire include water-quality monitoring programs, repair of control lines and access tracks, and sediment and erosion control. Replacing topsoil, building silt fences, and planting shrubs and trees to stabilize the soil can mitigate erosion after fires.

Sydney, Australia’s largest city, is now expecting a large amount of ash and fire debris to enter its dam storage from upriver, complicating water treatment. Measures to preserve the quality of released water include taking water from different depths and areas of the reservoir, as well as extending booms and curtains to cordon off areas of risky water quality. There is concern for many smaller communities that don’t have Sydney’s resources to manage drinking water supplies.

Watersheds are vital water-storage assets, retaining and releasing an even flow of water throughout the year. Without intervention, freshwater watersheds in Australia have usually returned to normal naturally within five to 20 years after a fire. Australia’s riparian ecosystems are surprisingly resilient, especially if they are connected to unaffected habitats. But this is no ordinary fire season.

Fluence stands in solidarity with the people of Australia, including our customers, partners and investors. We are proud to be ASX-listed and proud to support Australia in its recovery from the devastating wildfires. For more information about relief efforts and to support these efforts with a donation, please visit the Australian Red Cross website.