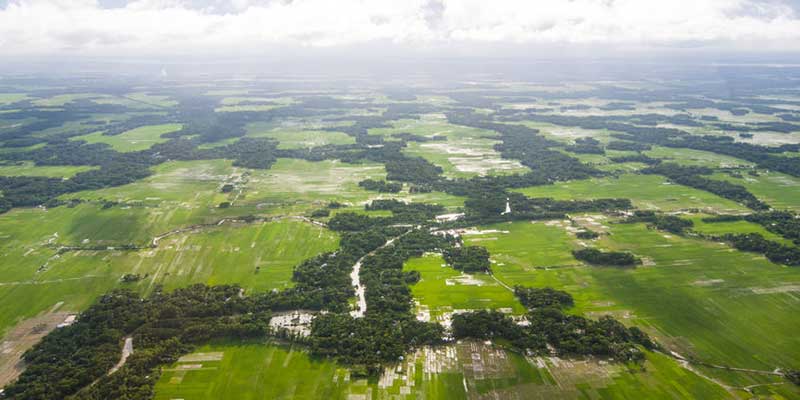 Because of Bangladesh’s coastal geography, arsenic, a toxic metalloid, occurs naturally in its groundwater.

The nation of Bangladesh, on the Bay of Bengal between Myanmar and India, is not quite the size of Iowa, but it has developed a continent-sized arsenic contamination problem. Because of the nation’s coastal topography, the toxic metalloid occurs naturally in the groundwater that Bangladeshis depend on, and the contaminated water, accessed through shallow wells, has been fueling a massive public health crisis.

In 2002, the World Health Organization (WHO) announced, “The largest mass poisoning of a population in history is now underway in Bangladesh.” Today, 40 million Bangladeshis drink water contaminated with unsafe levels of arsenic, and the health risks are real and significant. But a new study offers hope through new strategies.

Chronic ingestion of arsenic is associated a wide range of ailments, including cardiovascular disease; infant mortality; and cancer of the liver, prostate, skin, bladder, and kidneys. It has many devastating effects upon children, such as motor and intellectual deficits. A new study has also found that early arsenic exposure leads to heart problems in later life.

The government of Bangladesh has earmarked $200 million to address the problem, but previous similar moves to fix the arsenic problem via pipelines and deep wells have been expensive and only negligibly improved the situation. A new study by Montclair State University’s Nadia Jamil relies on decades of research by Columbia University Lamont-Doherty Earth Observatory researcher Lex van Geen to propose new strategies to combat arsenic poisoning.

Van Geen’s research first showed that simply testing wells and educating citizens on the risks of arsenic can influence an average of 60% of them to use lower-arsenic sources of water. The team’s recent testing of 48,790 wells in the Araihazar province motivated an estimated 132,000 Bangladeshis to seek out a safer water source. The cost of the effort came in at only $1 per person.

Arsenic contamination is more prevalent in shallower wells. Previous government projects such as drilling deep tube wells and constructing pipeline networks, however, came at a cost of around $150 per person served and proved less effective, partly because the government charges households 10% of the cost of establishing new wells. Consequently, wells are frequently drilled on privately owned land when establishing public wells would provide the greatest benefit at the lowest cost. Drilling medium-depth private wells, for instance, can reduce arsenic exposure for $28 per person.

The research team also warns against construction of piped water systems, which because of their cost should only be used in areas where deeper wells would fail to provide benefit.

Even though the government of Bangladesh is moving forward with a deep tube well and pipe network strategy, the researchers suggest that the new wells could have a markedly improved effect by simply siting them to make them truly public. Just 916 wells on public land could put a safer well within 100 meters of 132,000 inhabitants, the researchers said.

Another new strategy to avoid extensive pipelining in the developing world is decentralized treatment, which is siting water and wastewater treatment plants at the source of need and supply. With newer energy-efficient treatment technologies and more agile plug-and-play packaging, treatment units can be shipped in to run on green energy and with little construction or site preparation, even off energy and water grids.

Response — from the Bangladeshi government as well as from abroad — has been haphazard. In fact, a Human Rights Watch report recently found that little had changed since 2003. Although efforts to mitigate are progressing slowly, drinking bottled water is recommended for now.