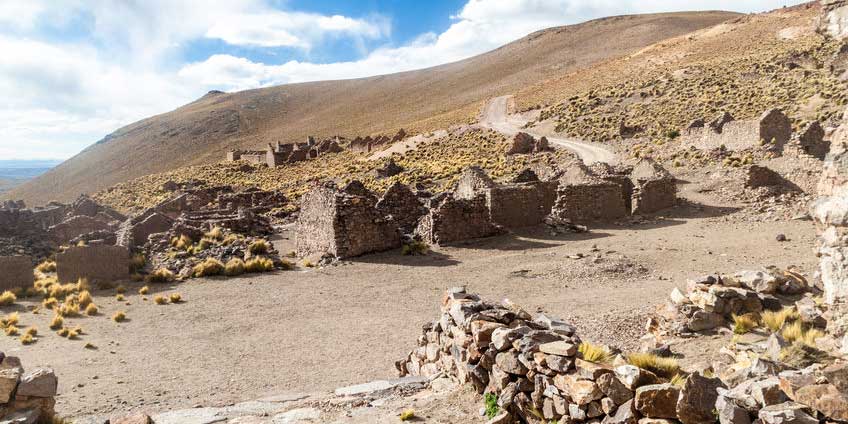 In Bolivia, arsenic contamination occurs both naturally and as a result of mining that has been going on since the days of the ancient Incans.

Prolonged exposure to the metalloid, from either natural or industrial sources, can cause a range of health problems

The World Health Organization (WHO) ranks arsenic as one of 10 most concerning chemicals from a public health standpoint. Prolonged exposure to arsenic, particularly in drinking water and food crops that require irrigation, increases the risk of cardiovascular, dermatological, and neurological diseases, as well as various forms of cancer. At least 4 million residents of Argentina, Chile, Mexico, El Salvador, Nicaragua, Peru and Bolivia are exposed to dangerous concentrations of it.

Natural geological factors are to blame for most arsenic contamination in Mexico, Argentina, Chile, Peru, and Nicaragua, but human activities also lead to huge arsenic contamination problems. Mining and smelting are responsible for much of the problem in Chile, Bolivia, and Peru. In Brazil, contributing to the problem are electrolytic processes in metal production. A smaller but significant source is arsenic pesticide, used mainly in Mexico. Generally, though, most arsenic in Latin American surface water and groundwater comes from minerals produced by Andes Mountains Tertiary and Quaternary volcanism.

Argentina’s northern and central areas, such as the province of La Pampa, have high arsenic concentrations. In La Pampa, arsenic levels vary widely by locality. Studies have observed levels of <4 µg/L to 5,300 µg/L in the region. Some urban areas use reverse osmosis treatment, but it’s impractical in rural areas and cattle lands. A 2012 study of arsenic contamination effects in the Rioja plain, Pampa hills, and Chaco-Pampa plain found an increased risk of colon cancer in women, and lung and bladder cancers in both sexes.

In the Andes Cordillera of Bolivia, it’s difficult to distinguish between naturally occurring arsenic and arsenic resulting from mining pollution because natural sources are plentiful and metal mining has been going on since the days of the ancient Incas, then of the Spanish colonizers. Heaps of mining waste from this long history still exist in the open, subject to runoff and dispersal as dust in the wind.

In the Quebrada Camarones region of Chile’s Atacama desert, the arsenic levels in the natural drinking water are so high that over the course of 7,000 years, residents have actually developed a tolerance to arsenic, new research suggests. Their water contains a 1 mg/L of arsenic, 100 times the WHO provisional guideline value of 10 μg/L.

In other parts of Chile, mining is one of the mainstays of the economy, and workers from all over the country work in the industry because of competitive pay. But mine workers and residents of mining areas frequently fall victim to arsenic exposure. The northern central zone of the country has both naturally high levels of arsenic and mining activity that compounds the problem.

In El Salvador, where only 2% of municipal and industrial wastewater discharges are treated and 90% of surface water is contaminated, arsenic from gold and silver mining became such an important issue that the small nation simply stopped all metal mining with an outright ban, which had the support of 77% of the country’s population. Arsenic levels 10 times the acceptable limit were found near a mine in the Department of Cabañas. El Salvador serves as a cautionary tale for the mining industry on the necessity of sustainable practices and good community relations.

Scientists cite overuse of aquifers and evaporation as the main mechanisms that raise arsenic levels in in Mexico. Levels in the northern states of Chihuahua, Coahuila, Durango, and Sonora vary from 7 to 600 μg/L. Aguascalientes, Guanajuato, Jalisco, Morelos, Oaxaca, Puebla, San Luis Potosi, Hidalgo, and Zacatecas also continue to post arsenic levels higher than the current Mexican standard for drinking water.

Information is scarce on the other Mexican states where levels above 10 μg/L are found. It’s impossible to make an accurate estimate of how many Mexicans are currently affected by overexposure to arsenic, but a 2001 attempt based on a few states suggested the number lies between 400,000 to 2 million residents exposed to concentrations over 25 μg/L.

Malnutrition and hepatitis B are common problems in Nicaragua, and studies suggest that they amplify the effects of arsenic exposure. A survey in Nicaragua, the Rapid Assessment of Drinking-Water Quality (RADWQ), however, discovered that the majority of Nicaragua’s water sources complied with WHO guidelines. None of the public water grid supplies had arsenic levels greater than the WHO guideline value, but 18 of the 46 municipalities studied in the survey had arsenic levels above the WHO guideline, with the worst compliance rate (8.8%) and the highest concentrations noted in Central North broad-area bore holes. Noncompliance was worst in Nueva Segovia (8.2%) and Madriz (5.4%), yet arsenic was also detected in the departments of Boaco, Estelí, and Matagalpa, as well as the North Caribbean Coast Autonomous Region (RAAN).

Although Peru has recently experienced considerable resistance to mining concerns, it is flush with natural sources of arsenic contamination, generally from enargite-bearing deposits of copper, zinc, and lead (enargite is a mineral containing a sulfide of copper and arsenic). Historically, Peru has been a major global producer of arsenic for use in pesticides, and it is a productive mining region for gold, silver, and copper. An estimated 1.6 million people live within 5 km of current or past mining operations. In 2014, 151 water samples from the Rímac river basin — including Lima, Achaya, Ananea, Caracoto, Platería, Juliaca, La Oroya, San Antón, Puno, and Taraco — were tested for arsenic. Almost 80% of samples were found to contain arsenic in excess of WHO’s 10 µg/L upper limit, and 41% contained more than 50 µg/L, five times the WHO standard.

A variety of technologies have been optimized for arsenic removal from water, such as coagulation filtration, oxidation filtration, media adsorption, ion exchange, and membrane filtration. Which strategy is used depends on a variety of factors, such as raw water quality, available space, byproduct disposal options, and the presence of other contaminants.

When many contaminants such as arsenic, fluoride, nitrates, salt, and other substances coexist in the water, reverse osmosis (RO) is justified. It has been used in Argentina since the 1980s. However, silica concentrations of 70 ppm or greater can damage RO membranes and can make adsorption difficult.

Ion exchange is unpopular because of inherent technical challenges and expense. Membrane separation can achieve up to 95% removal, but initial expense is high and it produces a concentrated arsenic byproduct that requires treatment. For potable water applications, adsorption using iron hydroxide is preferred as the method does not decrease water quality.

In a recent article, Fluence’s Vice President of Marketing & Sales for Latin America, Alejandro Sturniolo, who sits on the board of directors of the Latin American Association of Water Desalination and Reuse (ALADyR), recommended coagulation-ultrafiltration as a solution for Argentina’s arsenic problem. Now, as Latin America and the world are developing an awareness of both the extent and the severity of this invisible threat to human health, modes of treatment must be tailored to the precise needs of the area.