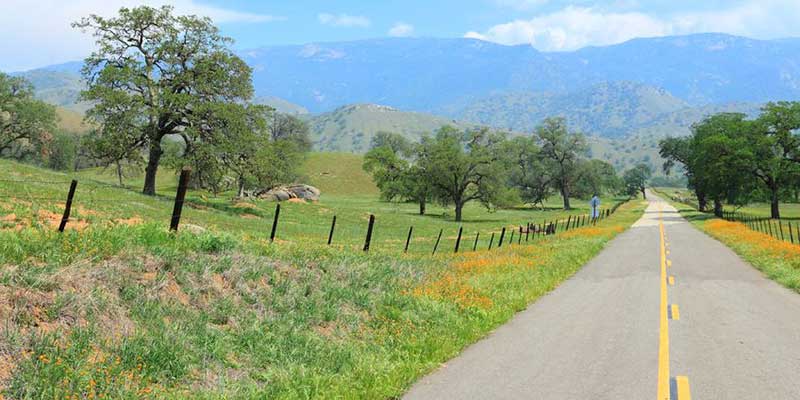 Researchers have established a link between aquifer depletion in terrains such as that of the Tulare Basin. When land in the basin sank more than 3 cm in a year, the chance of arsenic contamination as much as tripled.

In a recent study, researchers used satellite data to establish a link between excessive pumping from California aquifers and dangerous arsenic concentration spikes in the groundwater of the Tulare Basin. This promises to be an important early warning system for the growing problem of arsenic contamination, which potentially threatens drinking water for more than a million people. Arsenic cannot be detected by our senses but has been implicated as a causative agent in heart disease, diabetes, and cancer. The study, “Overpumping leads to California groundwater arsenic threat,” by Stanford researchers Ryan Smith, Rosemary Knight, and Scott Fendorf, was published in Nature Communications.

The vast Tulare Basin is bounded by the Sierra Nevada range to the east, the California Coast Ranges to the west, the San Joaquin river to the north, and to the south, the feet of the Tehachapi Mountains, where the Edmonston Pumping Plant sends water nearly 2,000 feet up and over the Tehachapi range to supply Los Angeles County.

The basin is fed by the headwaters of large mountain reservoirs filled largely by runoff from snowmelt. The water is then stored in lower foothill lakes and distributed through an extensive canal network. Water is also brought in from wetter northern California by way of the California Aqueduct, the Friant-Kern Canal, and the Delta-Mendota Canal. Groundwater pumped elsewhere also finds its way into the Tulare Basin. Recycled and reused water is a small but growing part of the basin’s water supply.

Water supply levels are influenced by the amount of annual precipitation. Factoring in climate change, the growing population, and the explosive growth of almond and pistachio farming in the state, demand for water has been outstripping supply. The state is taking ambitious actions to prevent overpumping water from aquifers, but changes will take time, and with no other water supplies available the pumping continues.

Although both ground subsidence from excessive pumping and arsenic contamination of aquifers have been well documented, the Stanford researchers are the first to discover a link between the two. They analyzed arsenic concentration data from hundreds of wells during two droughts and compared them to 68 interferometric synthetic-aperture radar scenes from the ALOS PALSAR sensor from between 2007 and 2010. The researchers used the satellite estimates of ground subsidence to establish a correlative link between it and high arsenic levels in groundwater. When land in the Tulare Basin sank more than 3 cm in a year, the chance of arsenic contamination as much as tripled.

On a positive note, when excessive pumping is abated, aquifers can recover as the arsenic is passed through the hydrological system. Study co-author Rosemary Knight, however, cautioned against relying heavily on this natural process because recovery rates may vary widely due to many variables in a region.

The primary significance of the study is that subsidence observed via satellite can now act as an early warning sign for dangerous arsenic levels in any aquifer that has layers of clay and sand, an arsenic source, and the low oxygen levels generally found in aquifers that exist under thick clay layers.